It was May 1996, and I had just graduated from college. I consider myself very fortunate to have had a great job ready and waiting for me upon graduation, but more than anything, I was most anxious about buying my first new car.

For the previous two years up until graduation, I pretty much had my mind set on getting a new Camaro Z28. I had it all planned out – the options, the color…I knew exactly what I wanted. But then the all-new Eagle Talon was released, and it immediately had my attention. I thought it was amazing looking, and having driven several examples of the previous generation car, I knew it was fast. So yeah…it pretty much erased any ideas I had about getting that Camaro.

After an entire lifetime of dreaming of owning a cool car, the pent-up energy inside me was too great and I found myself standing on the dealer lot right after work on my first day. Looking back on it now, I realize how much of a dumbass I really was. I bought the first car I looked at, which happened to be a brand new 1996 Eagle Talon Tsi – with 240 miles already on it. I’m sure that car had a tough life up until that point, and even the sales guy ragged on it a bit as he took me for a spin before letting me drive it. No matter, my heart and eyes had glazed over in new car lust and I put a deposit down on it right then and there. I didn’t even have my first paycheck yet, so I had to wait two weeks before I could provide them with a paystub as proof of employment. It was the longest two weeks of my life.

Eventually I got the car and I couldn’t be happier. It looked great, handled well, and was a blast to drive. Here are some of my thoughts and various comments about my 1996 Eagle Talon Tsi:

First of all, it was a strong little car once the turbo spooled up. The problem was that the turbo lag was horrible, and getting full boost upon acceleration took a lot of practice. Mashing the throttle from a dead stop in first gear didn’t produce any boost, and it accelerated like a non-aspirated 4 cylinder. However, launching from a roll while the car was turning about 2000rpm in second gear produced wonderful amounts of boost and the car felt like a downright monster. Being my first experience with a turbo up until this point, it took some time for me to figure out how best to get the most power out of the car.

My Talon was front wheel drive – it didn’t have the AWD option. This meant dealing with some traction issues every now and then, but it was pretty fun to be able to spin the front wheels while rolling at 30mph in the rain when the turbo kicked in. That was probably one of my fondest memories of that car – for a young guy like myself at that time, there was nothing cooler than being able induce wheelspin from a roll with just a blip of the throttle. Hey, I admit it – I was (and still am) easily amused.

The interior was comfortable, and the seats were great on long trips. The longest road trip I did with the car was about four hours, and I never thought it to be awkward or uncomfortable. Of course, the view out the back was slightly obscured by the thick b-pillars and steep hatch, but it’s nowhere near as bad as some other cars I’ve driven.

Although it was a heavy car, it handled quite well – certainly better than the clapped-out 1980’s Pontiac 6000’s I’ve owned up until that point in my life. It’s only fault was the fact that it felt kind of nose-heavy, which didn’t make it seem very toss-able in really tight situations. But it handled highway on-ramps and exits with ease, and it never felt skittish to me – very solid and planted most of the time.

By the way, the sunroof was great. Not only was it large, it moved completely out of the way with just the press of a button. With such a short and sleek roofline, it accomplished this by lifting itself out of the frame and moving all the way to the rear of the roof. I thought it made the car look very cool when it was open.

I drove the car for 16,500 miles before trading it in on something else in January 1998. During that time, the only mechanical fault (besides a battery that died at 15,000 miles) was a master cylinder that went bad at about 14,000 miles. It was fixed under warranty, and it didn’t take any time at all to fix. The only other issue I had was totally my fault – I mistakenly used mag wheel cleaner to clean the wheels (don’t ask), and it ate away the clear coat on all four wheels pretty badly. I’m still slapping my forehead for that boneheaded move.

On a related note, several years ago I checked the VIN with Carfax just to see whatever became of it. It was still in service in the local San Diego area, but it had a long list of repairs done to it over the years – it hadn’t held up well, it seems.

I have no regrets on that purchase, except for the fact that I spent a bit too much for a young guy just out of school. But the car was great fun and I still hold fond memories of it today. 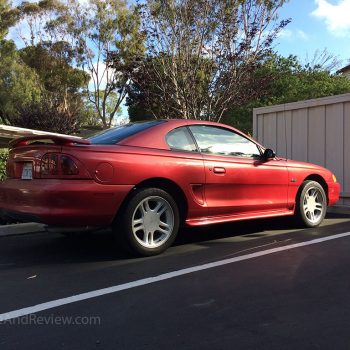 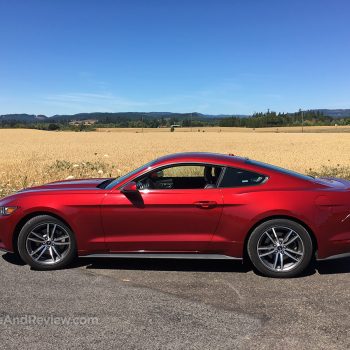