I could tell by the look on my dad’s face that he wasn’t totally thrilled with the idea. After a brief pause and a deep sigh, he responded “yes, we can go to the auto show next week”. You see, my dad isn’t a car guy at all – and the idea of driving down into the city on a perfectly fine evening to wander around an auto show wasn’t very high on his list of things he wanted to do. But I give him props for being a trooper and taking me – it really meant a lot to me at the time.

It was about an hours drive down to Cobo Hall in Detroit, and I remember it being very cold and a bit snowy. January in southeast Michigan is not a beautiful thing – it’s pretty much gray and brown in between the occasional snowfall, and the wind can be downright brutal at times. But no matter – I was as happy as a 12 year old boy could be on this dreary winter evening in January 1987.

In addition to not being a car guy, my dad is not a fan of big cities. Detroit is big enough to give the man heartburn, and I could just sense it as we drove along at a snails pace while stuck in traffic near the parking garage for Cobo Hall. The silence (and occasional sighs) were deafening. But there I sat at his side, with a smile a mile wide across my face.

Long story short, dad’s mood instantly improved once we got inside. He did well taking pictures, and I could sense that he was having fun checking out some of the more interesting exhibits. Of course I was pretty much in car-geek heaven being up close and personal with all those cool cars, but it actually turned out to be a pretty good father-son bonding experience.

So grab a cup of coffee, sit back, and reminisce with me over this collection of pics from the 1987 Detroit Auto Show at Cobo Hall: My thoughts on the 2015 San Diego Auto Show 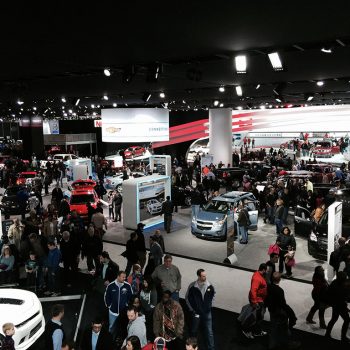