I’ve already written a lot of posts (and uploaded a lot of pictures) of my 1996 Ford Mustang GT, but I haven’t shot much video of it up until now. It’s not a very exciting car by any stretch of the imagination, and quite frankly there isn’t much to show. It’s a mid 1990’s Ford with a ton of miles on it and faded paint. Does the world really need to see another video of a well-worn SN95 Mustang GT? Probably not, but I shot this video anyway.

There were actually two very good reasons why I put this video together. First, I’ve started doing blogs (video blogs) and posting them to YouTube, but I haven’t really shown much of this car despite how much I talk about it in my videos. I felt it was important to do an official introduction of this car to my followers who may have not seen my posts about it here on driveandreview.com. Second, I’m trying to earn money on the side in order to get out of this thing and into a better car, so I don’t plan on having it much longer. Therefore, I want to document it as much as possible for my own personal archives. I wish I had video footage of all the cars I’ve owned in the past, so this little clip will be something to help remember this car years down the road. Yes, I can hear you all laughing now. “Why would anyone want to remember a mid-90’s Mustang??” I know, I know. But I’ve bonded with this car and I like it quite a bit despite how much of a pile of crap it is.

As you can see from the video, this car is 100% stock with all the wear and tear that you would expect for a 20 year old Ford. Completely stock SN95’s are becoming more and more rare by the day, so that is probably what makes this car the most interesting to me. On top of that, this is a California car that has not a spec of rust anywhere on it (ok, the brake rotors are a bit crusty in places), and that alone will probably make it that much easier to sell when the time comes to trade up to something else. But there’s that whole odometer issue – who wants to buy a car without knowing exactly how many miles are on it? I’ll cross that bridge when I come to it. 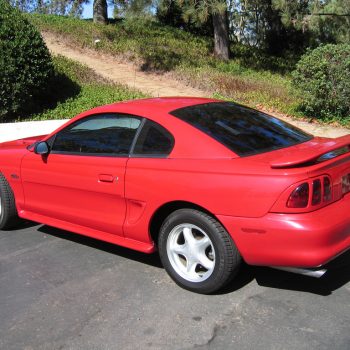 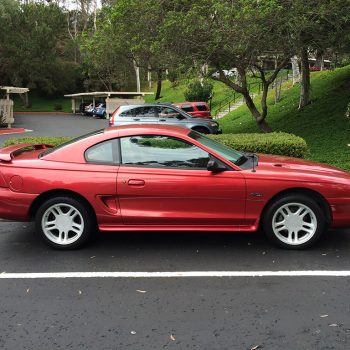