Of all the cars on the TJ Hunt YouTube channel, it was the 1994 supra build that seemed to get everyone’s attention. Looking back on all the comments on all the videos, it appears that most were extremely excited and supportive of TJ during the entire build process. But then, there were others like me who absolutely hated the TJ Hunt Supra and cringed with nearly every video.

No, I don’t hate Supra’s or anything. As a matter fact, they are one of my favorite cars ever. But the way TJ went about this entire build really got on my nerves to the point where I couldn’t finish watching the entire series.

However, just like I did for his recent builds of the RX-7 and Mustang, I wanted to create a proper parts list and post it here to the blog. All of that information is down below, but first…a rant. By the way, if you have absolutely no idea who TJ Hunt is, do be sure to read all about him before proceeding.

The problem I have with the TJ Hunt Supra build series

Look. I have absolutely no problems with anyone taking a car as iconic as a 1994 Supra and heavily modifying it. However, I absolutely do have a problem when the car that someone starts with is a 100% stock, low-mileage, historic museum piece.

The thing that grinds my gears (a pun perfect for an automotive blog, right?) is the fact that TJ purposely sought out the most perfect and cleanest low mileage 100% stock Supra he could find for this build. The car was literally a museum piece, and his utter disregard for the history and uniqueness of it was migraine-inducing.

Why pay top dollar for a near-perfect car with historical value, and then proceed to cut it up and throw aftermarket parts on it? I would’ve felt so much better about this build if he would’ve started with a rougher car that needed saving – just as he did with his 1994 RX-7.

Anyway, I was one of the people who (on the very first video) voiced any opinion about how selfish it was to destroy such a rare car, but I was instantly attacked by 12-year-old keyboard warriors who came to the defense of TJ and basically told me to “screw off and let him do what he wants with his own car”.

In hindsight, I guess I can’t argue with that. This is TJ’s car, and they’re absolutely right. He can do whatever he wants with it. And I can’t do anything about that.

A brief summary of the build process

Now that I’ve got my old man / “get off my lawn” rant out of the way, let’s get into the fun stuff. Despite how I feel about TJ destroying such a rare and beautiful car, I will say that I was pleased to see him have some restraint during the entire build process. It was obvious he knew how special this car was, which prevented him from going full-send with a full body kit and bagged suspension (just as he did with his BRZ build).

Note that these numbers were obtained on E85 and 28 pounds of boos. He dialed it down to 26 pounds of boost and 675hp for daily driving though.

Compared to some of his other cars, the TJ Hunt Supra was one of the longer builds. Purchased on July 25, 2018, the entire build moved slowly and carefully. TJ said over and over that she didn’t want to rush anything because of how special of a car it was.

This build is moving so slowly that it’s actually not complete at the time of this writing. I assumed that he was finished with it several months ago, just as I was starting to do the research for this article he started posting more videos about it with some new modifications. this isn’t all that surprising I guess. After all – when is a project car ever finished?

Despite its relatively stock-looking appearance, there are actually quite a bit of parts that went into this build. TJ mentioned over and over again how she didn’t want to go crazy with this car, so most of the modifications he put into it were under the hood and out of sight.

One the other things that really miffed me about this build with the fact that he didn’t keep all of the original parts for it. For example, he sold the stock wheels and tires that were in near-mint condition. He traded the perfect 100% stock seats for aftermarket Recaro’s. And the original turbos? God only knows what happened to those.

I’ll say it again: this car (in 100% stock form) deserved to be in a museum. Why he didn’t purchase one of the many other Supra’s out there (one of the ones that desperately needed saving) is mind-boggling to me.

Timeline of the build

As I mentioned earlier, TJ’s Supra took a lot longer than most of his other builds. I’m glad he took his time with it, and it wasn’t the total hack-job that his BRZ was.

For what it’s worth, I am willing to bet that this build will continue for many years into the future. This Supra means a lot to TJ, and of all the cars in his fleet, I’m definitely getting the sense that this one is the most special to him. I’ll do my best to keep this timeline (and parts list) updated as time goes on.

How much did this Supra cost to build?

Just as with his RX-7 and Mustang builds, it’s very likely that TJ had sponsors to help him out with some major components of this car. That being said, just for fun, let’s pretend that he paid full retail price for everything just so we can get an idea of how much it would cost for you (or anyone else) to build a Supra like this of their own.

As you can see, the TJ Hunt Supra was one of his most expensive builds ever. Even though I’m not very happy with the way that he hacked up such a beautiful and rare example of a 100% stock twin turbo Supra, I’m glad that he spared no expense on the things that he did. He took his time with every step of the process, and the end result really shows it.

Did you know that TJ had some extra help with this build?

Thankfully TJ made this purchase at a time when he was starting to “mature” as an automotive customizer. Gone were the days of taking a hacksaw to his BRZ without a care in the world, and he approached nearly every single portion of this Supra build with deep thought and care.

The biggest example of this was sending the car to Dan at Rad Industries up in Santa Ana California to get all the fab work done. TJ knew that he nor Calvin could do it themselves, and he wanted everything done right, so he sent it to an expert. It was never disclosed how much money he paid for that work, but it couldn’t have been cheap considering how much time and effort went into it in Dan’s shop.

Dan and his crew poured hundreds of hours into TJ’s Supra to get it running as perfectly as it could. It took months to get it right, and whatever TJ spent to get the final result, it was absolutely worth it in my opinion.

Was it wrong to cut up such a rare and valuable car?

Despite me ranting like a crotchety old man for this entire post so far, I’m not afraid to throw out some respect when and where it’s due. In this case, I will admit that TJ did a pretty good job on this car. It looks great!

It took me a while to get to this point, because I actually stopped watching this build series just as he was starting to dig into the engine to install the single turbo to replace the stock twin turbo set up. I just couldn’t take anymore at that point, and I skipped over any MK4 Supra videos he uploaded from that point forward.

However, in doing the research that I needed to do to make this blog post, I had to go back and watch every single video in the series. And you know what? I actually like what he did with his car. Yes, it’s slightly overdone in my personal opinion, but it’s still relatively clean and he kept the stock flavor of it throughout.

I was also able to reflect a bit on where TJ is in his life at the moment. At 24 years of age, TJ is simply too young to appreciate the historical value of stuff like this. And that’s OK. I personally didn’t start getting sentimental about objects until I was about 30 years old, so he’s got some time yet to build some nostalgia of the stuff he’s doing now. 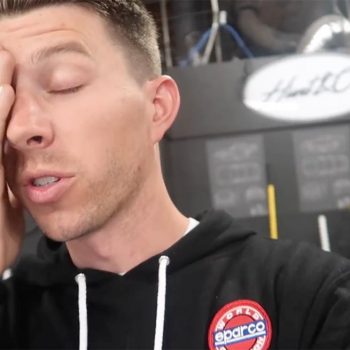