Despite two full days of driving from San Diego to my current location of Amarillo, TX, I was up bright and early for the long haul to Little Rock, AR. Well, “bright” probably isn’t exactly the right word to be using here, as I actually rolled out of bed before the sun came up. Yes, I was that anxious to get a head start on the day. After a quick shower and a light bite to eat (going to the grocery store the night before to stock up was a good idea), I packed my things and checked out of the hotel.

The Corvette survived another night unscathed in a busy public parking lot, but she wasn’t as anxious as I was to get going this morning. The first starting attempt didn’t go well. She sputtered and coughed, and overall sounded pretty rough for what was essentially a brand new car. Thankfully, she got that out of her system quickly and fired right up on the second attempt. I was off and on my way out of Amarillo.

Unfortunately, I timed my departure right with the morning rush hour traffic, so things were a bit slow for the first 30 minutes or so as I made my way out of the city. The skies were overcast an dull, with drizzle starting to build the further I drove east.

I stopped for gas an hour later in Shamrock, and it was there that I drove my only stretch of the original Route 66 of this trip. Unfortunately, the road was in deplorable condition and the rain and mud puddles made for a rather miserable experience.

Oh well – if the conditions were better I probably would have cruised Route 66 for a while, but the weather was not cooperating at all. I did, however, see a nice collection of Corvettes (including some C7’s) on display at a corner automotive store here in Shamrock. These were the first C7’s I saw on this trip so far.

I’d also like to point out that the wind farms along I-40 in this part of Texas are amazing. There are hundreds of huge wind turbines for as far as the eye can see, and the fog and rain of this particular morning made for an erie (but super cool) scene. Traffic was super light, so I’m kicking myself for not pulling over and getting some pics of the Corvette in front of some of those turbines.

The rain became progressively heavier as I made my way through Oklahoma, and by the time I passed through Oklahoma City it was coming down in buckets. The Corvette handled it all very well though – it felt planted and solid through the heaviest of it, though there was one scary moment where I lost traction at 65mph as I hit the gas to get around some merging traffic.

Whoa! It’s hard to imagine how much power this car can put down even at highway speeds – it’s brutally powerful and demands respect in conditions like this. Lesson learned.

I stopped at a rest area just outside of Oklahoma City for a quick break, then topped off the gas tank a few miles down the road.

From there, it was non-stop all the way to Little Rock. The car was running like a champ despite the pounding rain, though a “change oil soon” notification popped up in the display cluster during the afternoon and I never was able to figure out how to dismiss it.

Unfortunately, the rain became heavy, and it was downright scary at times because visibility was so bad. The car wasn’t hydroplaning much, but the spray from the trucks was crazy. This wasn’t an easy afternoon of driving, and I had to concentrate 100% to make sure I didn’t end up putting this beautiful car into the ditch.

That’s not to say that the Corvette was a handful in these conditions. As a matter of fact, I thought it did extremely well and I never felt as if it couldn’t handle all that rain. We don’t see this kind of rain in southern California!

I was feeling downright relieved when I started approaching the outskirts of Little Rock (my destination goal for the day) shortly after 5pm, but then the skies opened up and visibility went to near zero. It was also about this time that I started noticing cars in the ditch on both sides of the road, and I knew that I had to get off the road ASAP. Luckily, I saw signs for hotels just a few miles ahead in Maumelle, so I made my exit and called it a day.

I forgot how much I hate driving in heavy rain. Living in San Diego has spoiled me rotten, that’s for sure. 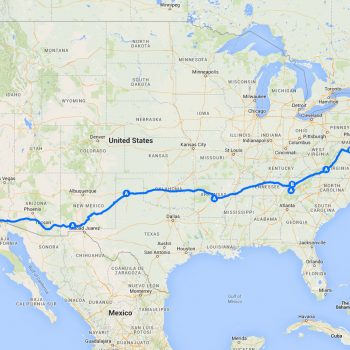 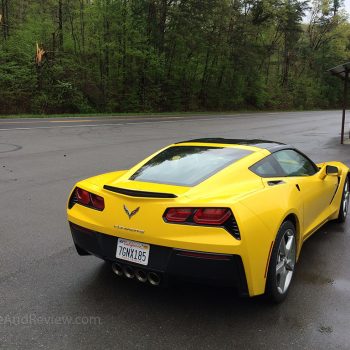